SHADOWS ON THE HUDSON

Shadows On The Hudson reviewed in Art Agenda 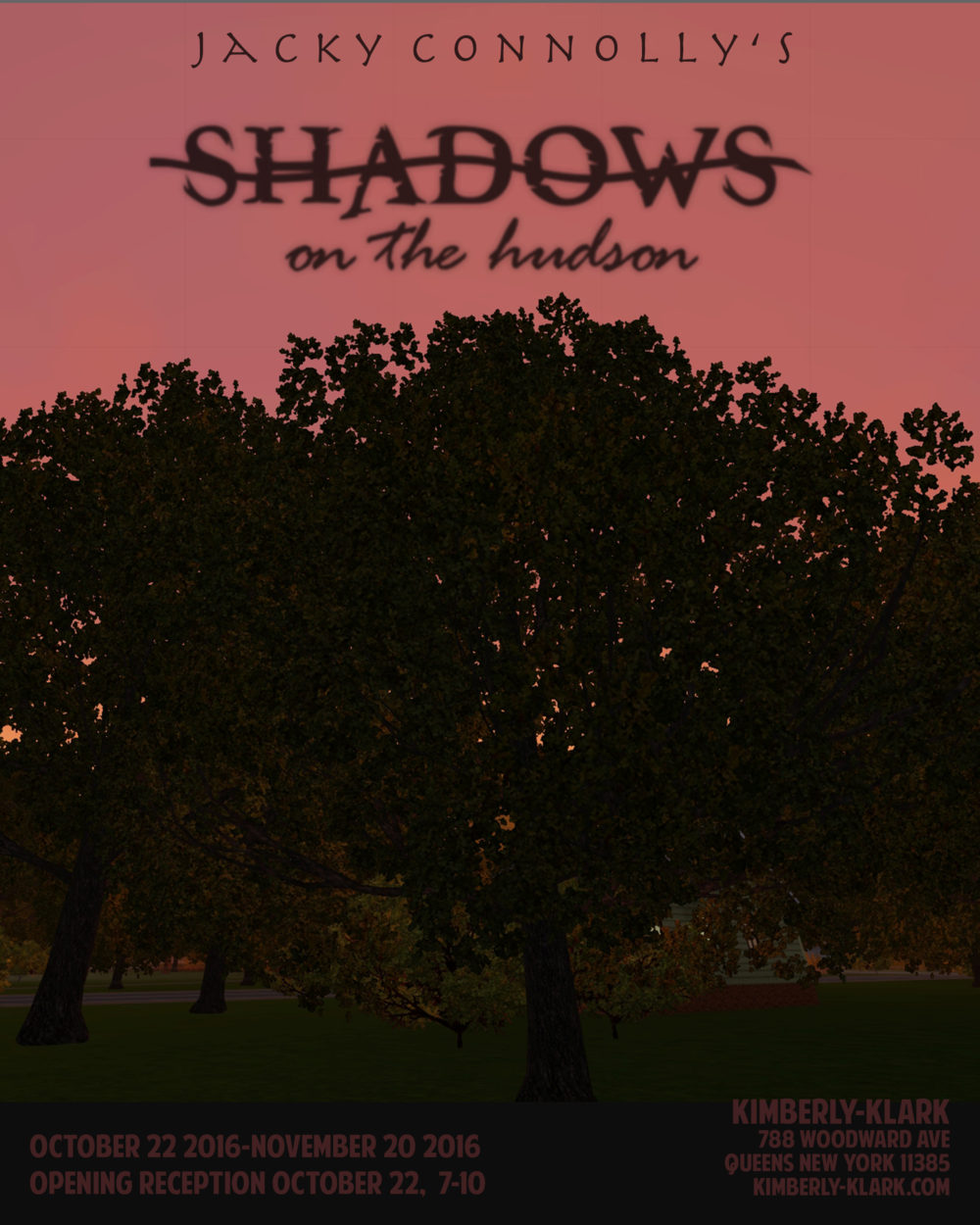 Shadows On The Hudson

Above a silent gray field,

Running on this silently loud trail

Cold in the shadows of a prison high school,

First period gym on the track.

The harsh October winds have forced

The morning is stark and unfamiliar.

As I sit on an unwelcoming school bus,

In the darker early hours,

I’m just a blurred shadow to those beside me.

Kimberly-Klark is pleased to present Shadows on the Hudson, the first solo exhibition by Jacky Connolly. The exhibition features Hudson Valley Ruins (2016), Connolly’s machinima film produced entirely in the life simulation computer game The Sims 3, alongside new sculptural works. The film represents Connolly’s first attempt to explore, through conventions of narrative cinema, the rural-suburban virtual world that she has crafted over the last three years.

Hudson Valley Ruins follows two melancholic avatars, a young girl and an adolescent who are accompanied by their otherworldly doppelgängers (the grey-haired child and the “Caretaker”), amongst other personas that populate this uncanny rural-suburban enclave. Estranged from familial life, the characters play out their isolated mundanities in a series of snow globe-like virtual tableaux. From their prison of a school to their shadowy bedrooms, a roadside Asian Fusion restaurant, and a treehouse in the midst of a school bus lot, the sets are haunting elaborations on upstate motifs, filmed in a seemingly never-ending twilight. Aberrations in the carefully generic suburban set-dressings, Connolly’s idiosyncratic props– a Red Hot Chili Peppers t-shirt, the nurse’s cigarette, or dining room Chagall paintings– watch over the interiors as displaced, cathected totems of personal history. Without any dialog, the film’s multi-diegetic story lines are linked by a perpetually chilling score, the ever-present weather sounds and animal screams of a virtual Hudson Valley. At once familiar and fragmented, Hudson Valley Ruins is a bizarre simulation of isolated upbringings– anxious nights spent in a cloistered basement or bedroom, punctuated by instances of domestic trauma.

Among other objects in the exhibition are three wall-mounted lightboxes hung opposite the film. The light boxes function as both movie theater advertising trope and literal shadows of the film—depicting singular scenes isolated from Ruins, located somewhere else in the expansive universe that she has created. The images’ simulated golden hour reds, yellows, and blues, made even richer in the lit transparencies, link these other figures and settings to the expansive sunset moment of the film. Yet these new sunsets seem almost portentously overcast– one’s title references the “Strange Weather” of a divorce. There is a palpable, dead indifference to this world– a shadowy network of patchworked vignettes and mysterious happenstance.

Note: Due to the nature of this exhibition, Kimberly-Klark will be open Sundays, 6-9 PM for the duration of Shadows on the Hudson.